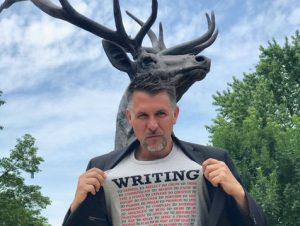 The South African humanist philosophy of Ubuntu, loosely translated, means “I am because we are.” Ubuntu, as a framework, has been central to Bryan Ripley Crandall G’12 and his work at the Connecticut Writing Project (CWP) at Fairfield University.

“A human being is a human being because of other human beings” Crandall says. “I am, because we are. I learned about this belief system through Hoops4Hope, a non-profit working with young people in Zimbabwe and South Africa. At Syracuse University, the role of community in literacy became very clear to me, especially in support of young people in schools. The best way to support a student writer is by centering him or her in the middle of their multiple communities. A writer is a writer when in the company of other writers.”

The Ubuntu philosophy has been essential to CWP’s summer programs. Each year young people in grades 3–12 participate in one- or two-week learning labs, and collaborate with teachers in a 6-week leadership institute. “Everyone gathers around writing and reflects on what works and doesn’t work for them,” Crandall says.

Youth literacy lab topics include: The Little Lab for Big Imagination; Game On! The Sports-Writing Lab, Who Do You Think You Are? The Narrative and College Essay Lab; To Write or Not To Write—A Shakespeare Lab; Project Citizen for Youth Activists, and Ubuntu Academy; a literacy lab for immigrant and refugee-background youth.

“We work to break down the traditional hierarchies between teachers and young people, and to create opportunities for individuals from many school districts to learn alongside one another,” he explains. “Each is encouraged as an individual writer, of course, but always in the context where we are writing together as a larger community.”

Crandall says the seeds of his work at Fairfield University were planted in the Reading and Language Arts Center at the School of Education. “With Marcelle Haddix, I learned the importance of youth empowerment, community engagement, and advocating for all writers,” he says. “With Kelly Chandler-Olcott, I experienced the importance of well-designed professional development with writing instruction that is deliberate and intentional.” Crandall notes he also benefited from Syracuse’s strong tradition with inclusion and disability studies.

Crandall’s vision has been strongly influenced by his decade of experience as a high school writing teacher in Louisville, KY, and through his dissertation work in Syracuse with African-born male refugee youth. Following his Ph.D. in English education, he accepted a faculty position at Fairfield University and is now director of the CWP, an affiliate of the National Writing Project and an associate professor in the Graduate School of Education and Allied Professions.

Entering his eighth year, Crandall is well known on the faculty, in the field, and in the community. He has been the recipient of numerous accolades and honors, including the Divergent Award for Excellence in 21st Century Literacies (2018), Elizabeth M. Pfriem Civic Leadership Award (2017), George E. Lang Award (2017), President’s Innovation Award for Community Engagement and Service (2016) and the Martin Luther King, Jr. Vision Award (2016). In fall 2019 his work with CWP will be recognized with an Outstanding College-Community Project Award by the Coalition for Community Writing in Philadelphia, PA.

Crandall attended North Syracuse Central Schools and holds Central New York close to his heart. He completed his undergraduate work in Binghamton, NY and spent 15 years in Kentucky where he completed two master’s degrees. He also studied at the Bread Loaf School of English in Vermont and New Mexico, was a Fulbright Memorial Scholar in Tokyo, Japan, and a Humana Scholar at Cambridge University in England.

Crandall’s travels, scholarship and teaching experience brought him to Ubuntu as a research tool in education. He says, “The best instruction, I’ve found, arises when individuals are brought together from multiple lived experiences to share their humanity with one another.”