How the Spector/Warren Fellowship and other Syracuse learning experiences forged a path for a passionate educator. 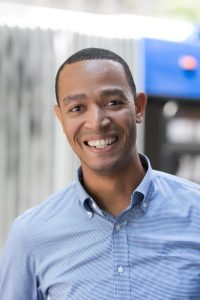 Tyrone Shaw always planned to be an educator. He was raised and inspired by his great aunt, who spent 50 years as a teacher and principal in Mount Vernon, NY, just north of the Bronx. He chose the School of Education at Syracuse not only because of the excellent financial aid package, but because of the renowned programs in teacher preparation. About to embark on his eighth year at McKinley Technology High School in northeast Washington, D.C., Shaw has developed a solid teaching philosophy and an appreciation for the advice and preparation that gave him confidence in his early career.

“Professor Jeffery Mangram stressed that we would be novices until our fifth year of teaching. He was right,” says Shaw. He says that when he first started teaching, he was concerned with creating a classroom that best fit his needs. “Now the classroom is centered around the students and their needs as learners,” he says. “It took time for me to foster the skills necessary to give the learning experience over to the students. I had to make sure I planned ahead to anticipate not only the academic needs of my students but their social and emotional needs as well.”

Shaw teaches 9–12 graders in World History, AP World History, and Global Perspectives—a social justice elective he created. He credits his graduate work in Cultural Foundations of Education with helping him to develop and refine his understanding of culturally responsive pedagogy.

“Issues of class, gender, race, disability, and immigration all come up in the classroom—in the lives of the students. They, and I, need to have an understanding of how these issues impact their lives and communities in individual and systemic ways.”

Shaw says he wants to teach his students not only to recognize these issues, “but to access the language they can use to responsibly discuss and politicize their experiences.”

He says that participating in Professor Ben Dotger’s eduSIMS, where actors play standardized roles and create scenarios for student teachers to experience—i.e., parent-teacher conference or a job interview—was “the best preparation for the field of education” he had at Syracuse.

Shaw points to other experiences at Syracuse that continue to inform his life and his work. As an undergraduate student, he served as vice president of Pride Union. A position that, he says, “helped me to better understand myself and others.” He was also the academic affairs committee chair for the Student Association, where he learned the importance of getting involved and making an impact.

Another learning journey that started at Syracuse has developed over the last decade into a passion and hallmark of Shaw’s pedagogy. Shaw was in the 2010 cohort of Spector/Warren Fellows and, as a graduate student, he had an assistantship with Professor Emeritus Alan Goldberg, helping to coordinate the fellowship and the Regional Holocaust and Genocide Education Initiative. This opened the door to many education and enrichment opportunities related to the Holocaust and other atrocities, and set him up with experience in coordinating content-based professional development for educators.

Shaw has led several class trips to the Unites States Holocaust Memorial Museum in Washington, D.C., where docent Lauri Zell ’77 has given guided tours. He has been accepted into and attended professional development workshops offered through the Anti-Defamation League in NYC and, last summer, he traveled through Poland with a group to Yad Vashem, studying materials from the Echoes & Reflections holocaust educators curriculum. This summer, his journey circled back to the beginning, when he participated in the Spector/Warren Alumni Institute at the Holocaust Museum Houston.

Shaw is careful and intentional with the ways he engages students in conversations about the Holocaust and human atrocities. “I use a strategy that focuses on affirming student voices in the classroom, no matter what they share,” he says. “In my Global Perspectives course, we engage in a lot of open dialogue. After students speak, I interject and rephrase what they share, using frames such as, ‘what I heard you say is…,’ or ‘Can I summarize what you said as…?’ This encourages students to share their own ideas but also react to and build upon their fellow classmates’ comments in responsible dialogue. Through dialogue, students can approach hard subjects from a framework of using the past to make sense of their present, and take informed action in the future.”