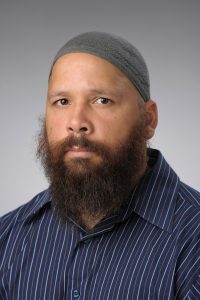 Sharif Bey, associate professor of art education in the College of Visual and Performing Arts and the School of Education, has been named the 2019 Judith Greenberg Seinfeld Scholar award recipient in recognition of his outstanding work as an artist, scholar and teacher.

Endowed by alumna and University Trustee Judith Greenberg Seinfeld ’56, the award recognizes faculty members who have shown a passion for excellence and exceptional creativity and originality in an academic or artistic field or endeavor. The award is intended to recognize “those who have made an outstanding contribution to the beauty of the world, and who have added to human values and to ending human abuse anywhere in the world.”

Bey’s scholarship focuses on uncovering and revising art education histories with a particular focus on African American artists and art education of former communist Europe. His studio work ranges from decorative/functional pottery to conceptual ceramic works that are influenced by ritual and identity. Current works reflect his interest in the visual heritage of Africa and Oceania, as well as contemporary African American culture. Through his work in clay and glass, Bey explores the cultural and political significance of ornamentation with colorful large-scale beads that he assembles into adornment pieces. Bey has conducted numerous lectures, workshops, presentations and exhibitions widely in the United States and internationally.

His work is included in the “Disrupting Craft: Renwick Invitational” exhibition currently on view at the Smithsonian American Art Museum in Washington, D.C., and is on permanent display at the U.S. embassies in Khartoum, Sudan; Kampala, Uganda; and Jakarta, Indonesia, through the prestigious “Art in the Embassies” program of the U.S. Department of State.

Bey has upcoming exhibitions slated for 2020 at the Carnegie Museum of Art in Pittsburgh and 2021 at the Everson Museum in Syracuse.

“Sharif exemplifies the best in studio art pedagogy,” says College of Visual and Performing Arts Dean Michael S. Tick. “His creative and traditional scholarship is exemplary, and he possesses all of the qualities we expect in a master teacher.”

“In addition to being an outstanding artist, Sharif is an excellent teacher and art educator,” says School of Education Dean Joanna Masingila. “He contributes in so many ways to art and art education on the campus and in the world.”

The Judith Greenberg Seinfeld Scholar Award is among many lasting gifts Seinfeld has created for Syracuse University over the years.

The Scholar Award was established in 2004 to honor Chancellor Emeritus Kenneth A. Shaw and Mary Ann Shaw in recognition of their years of devoted service to the University. The designation as a Seinfeld Scholar is not intended as a prize for past accomplishments so much as encouragement and stimulation for future contributions to society. Faculty recipients are nominated by academic deans, and awardees receive a restriction-free grant of $10,000 to encourage them in their continued outstanding performance.