The Syracuse University community will come together on Friday, April 12, for the third annual One University Awards Ceremony, celebrating excellence within the University. The ceremony, at which major University awards are bestowed, will be held in Hendricks Chapel from 4-5:30 p.m., with a reception to follow in the lobby of the Heroy Geology Laboratory.

This year’s recipient of the William Pearson Tolley Medal for Adult Education and Lifelong Learning is the late professor emeritus Donald P. Ely. His son, Christopher Ely, will accept the award on his family’s behalf. 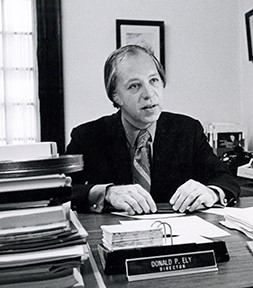 Donald P. Ely (1930-2014) was a professor at Syracuse University focusing on instructional technologies. He received a bachelor’s degree in English literature and speech and drama from SUNY at Albany, a master’s degree in audiovisual communication from Syracuse University, and a doctorate in audiovisual communications and psychology in 1961 also from Syracuse.

Ely’s work took his around the world as an instructor, guest lecturer, and consultant. He sat on the editorial boards of the British Journal of Educational Technology and the Revista de Tecnologia Educativa, among others. He was also a member of the National Education Association, the American Association of School Librarians, and the Association for Educational Communications and Technology. He retired from Syracuse University in 1995.

As one of the nation’s preeminent leaders in higher education, William Pearson Tolley served as Syracuse University’s Chancellor for 27 years. The University established the Tolley Medal in 1966, in conjunction with the School of Education, to recognize strong scholarship and leadership in lifelong learning. This year’s recipient is the late professor emeritus Donald Ely. His son, Christopher Ely, will accept the award on his family’s behalf. Additional honors bestowed at the ceremony include the Chancellor’s Medal, Chancellor’s Citations, Award for Public Engagement and Scholarship, Meredith Professorships for Teaching Excellence, and the Diversity and Inclusion Award.

Read more about the 2019 One University Awards