Inclusive education in Mexico lags behind that in the United States, even at the best high schools, says Ernesto Marquez Fragoso, a mathematics and science teacher at Colegio de Ciencias y Humanidades (the College of Sciences and Humanities) in Mexico City.

“We don’t have a lot of students with disabilities who are identified in our schools,” he says. Fragoso is one of 16 recipients of the Fulbright Distinguished Award in Teaching Program for International Teachers who spent the first half of the spring semester at the School of Education. Like most students, he had to return home over spring break due to the COVID-19 outbreak. 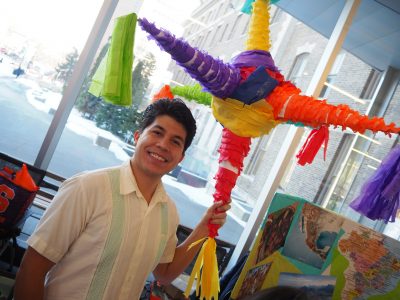 Although cut short, the Syracuse experience was impactful and exposed Fragoso to new material and ways of teaching and learning. He audited two SOE courses, International Education for Transformation and Significant Disabilities in Education: Shifts in Paradigms and Practices and says, “This was my first time doing something about disabilities and inclusive education. I think we need more in Mexico.”

“As teachers, we don’t have any specific training about it,” Fragoso continues, though in recent years topics like gender equality and school violence have received increased attention, and accessibility to most buildings has improved. “I really would like to share with my colleagues in Mexico the different areas and characteristics of inclusive education I have learned.”

The College of Sciences and Humanities is one of three secondary education programs offered by the National Autonomous University of Mexico, the largest university in Latin America. Located on the university campus, “It’s kind of prestigious and with good conditions and facilities,” says Fragoso, who has 12 years of teaching experience.

“We have a lot of resources compared with rural areas.”

Mexico’s educational system—offering free education through college and the postgraduate level—is more federal than in the United States, he says. The Secretariat of Public Education regulates education and sets standards for all schools except at universities the government has chartered, like the National Autonomous University of Mexico.

Fragoso ticks off several issues troubling Mexican schools: corruption, gender inequality, bullying and harassment in schools. “Not every school has proper classrooms, bathrooms or technology to provide education,” he says, though “my local context is different.”

His field placement was at Jamesville-DeWitt High School, which he calls “a nice school with very good teachers and students.” Fragoso observed mathematics, biology, physics, forensics, arts and languages classes.

“There are a lot of good ideas there: the way to get involved with the students, the activities in the library, the topics and projects in classes, decorations, clubs.”

Fragoso calls Syracuse “a nice city, but a small place compared to my city” with its population of nearly 9 million. His inquiry project is based on an interactive study to understand rational functions among high schoolers from Jamesville-DeWitt and the College of Sciences and Humanities.

“We are working with four members [two from each of the schools] in 11 teams to model graphs describing the most recent tsunamis in the world,” Fragoso says. “The students are working through Google Docs and planning a two-minute video to describe both their local context and the tsunami.”

The College of Sciences and Humanities has three campuses, each with about 12,000 students and 750 teachers. “They are small cities. I love them,” says Fragoso, who teaches at the south campus. Science and mathematics classes average 25 students, social studies 50. High schools in Mexico are three-year programs, for students 15 to 18.

“We try to increase autonomy among students” by using three principles—learn to learn, learn to do and learn to be—he says.

Co-teaching is another American practice he wants to encourage in Mexican schools.

“We have co-teaching programs, but they are just done by the goodwill of teachers who love their jobs,” he says. “Sharing different theories about co-teaching will increase different areas and opportunities such as research.”

Fragoso wants to build on the foundational principles of inclusion and collaboration that he experienced in the School of Education with his students and colleagues in Mexico.