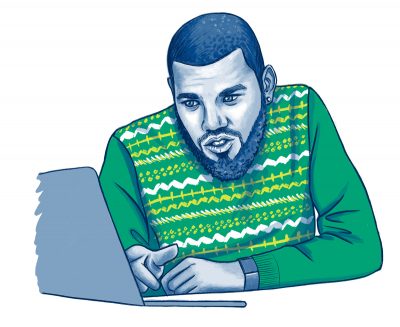 Marcus Peterson is a 2014 graduate of the English Education program, and is currently at 6th Grade Reading Teacher at E.L. Haynes Public Charter School. Read the entire profile on the Haynes’ 15 Years, 15 Stories.

“Mr. Peterson’s dedication and commitment to excellence is inspiring. In his role as a teacher leader, he led his department on using data and looking at student work to drive improvements in our ELA student achievement data. He is thoughtful, humorous, and well respected by students and his peers.”
– Zenada Mahon, Principal, E.L. Haynes Middle School

Since he was in the second grade, Marcus knew that he wanted to be a teacher. “I even went to career day dressed up as a teacher.” Born and raised in Brooklyn, New York, Marcus attended New York City Public Schools. And since an early age, education, youth development, and mentoring were an important part of his life. When he was in high school, he and his friends volunteered after school in a kindergarten classroom in East Harlem twice a week. “We’d go and read with the kids and just talk to them and listen to them, as mentors.”

Following his graduation in 2010, he moved upstate to attend Syracuse University. Because of his fascination with numbers and problem solving, he briefly enrolled as a math education major, but after a semester of that, and finding out that he’d have to take Physics 2, he immediately switched back to majoring in English education.

A first generation college student, Marcus had to navigate the post-secondary landscape on his own, but tutoring and mentoring remained a constant in his life. He was part of several organizations that tutored and mentored youth in the Syracuse community, and even led his chapter of Alpha Phi Alpha’s education and mentorship programming.

Following graduation, Marcus followed his passion to working in youth development and served as a college counselor for St. Nick’s Alliance, a non-profit organization back home in Brooklyn.

He was beginning to get restless in New York. “I think going away for college and studying abroad opened my eyes to seeing past New York. I wanted to move to DC.”  His college roommate and close friend was doing Teach For America (TFA) in Texas and was moving back to DC, and he had accepted a position at a KIPP school, and Marcus figured he could do the same. After speaking with the team at KIPP, they directed him to the Capital Teaching Residency Program (CTR) since he did not have any formal teaching experience.

Founded in 2009 and designed to meet the growing need of teachers in Washington, DC, CTR was launched by E.L. Haynes and KIPP DC as a teacher training program. The cornerstone of the CTR program was a one-year residency at either E.L. Haynes or KIPP DC. Residents work to develop into skilled educators by working alongside an excellent mentor teacher, receiving targeted coaching and feedback, and working toward certification with relevant coursework. The program adopts a gradual release model to ensure that residents are competent and comfortable in the classroom before becoming lead teachers.

At first, Marcus really wanted to teach in a high school classroom. He was interviewing with Myron Long, the middle school principal at the time, who encouraged him to try middle school, and even then, he was paired with a fifth grade reading classroom. But, he was hooked, he knew right away that middle school was where he belonged.

“The kids are going through so much at this age, and I love teaching middle school. They’re just like me. They’re in that weird stage of thinking they’re grown, but still cry if they don’t get their way. I still hold close to my inner child, so it helps me relate to them. Every day is a different day, you don’t know what kind of surprises you’re going to get. You really have to have a tough skin to teach middle school; there’s so much mess that comes with it…”

One of his most memorable moments teaching at E.L. Haynes happened last school year. The class was reading Blood on the River, a novel about English settlers coming to America, where a young boy dies. He decided to host a mock trial in the classroom, where students were lawyers, witnesses, members of the jury. They developed positions and arguments. And, in walks Hilary Darilek (E.L. Haynes’ Chief Executive Officer).

“Hilary happened to pop in, just to say hi and see what was going on—which I was used to. But she stayed the entire time and even spoke to me afterwards about how great it was to witness that. I think that when your CEO has time to hang out in your class, unplanned and unsolicited—it shows how much of a community we are at E.L. Haynes, but also how much each person is vested in if our kids are learning and what they are learning.”

Hilary remembered the class. “Marcus started his teaching career as a resident at E.L. Haynes and worked tirelessly from his first day to focus on his students. He constantly comes up with new ways for his students to shine and demonstrate their learning—from creative Instagram posts to mock trials to writing competitions. In a very short time, he became invaluable to his students, to his team, and to our community. I always look forward to visiting his classroom and to seeing how he leads and supports ELA instruction across the middle school,” she says.

As an Advanced Placement English student at his high school, Marcus fell in love with language and the power of words. And he wants to help our middle school students foster that love of language. “ELA is a social justice oriented skill—how well you can read, write, and speak, and communicate, people will judge you. It is perfect for our students, especially our students from marginalized backgrounds, to develop these critical skills.”

The transition to home learning has been tough on Marcus. At first he welcomed the idea of working from home at a personalized schedule, and using all the technology to connect with the kids and teach them. “But the challenge is not reaching all of my students in a live learning setting.” Marcus, like many teachers, prefers teaching and troubleshooting in-person. But, as he says, “I’m growing an extra layer of patience and new skills with this method.”

“There have also been some bright spots!” He joined forces with Ms. Lattes, the Social Studies teacher. They both teach reading and writing skills, so they’ve designed a joint class. This collaboration has increased student participation in synchronous online learning. A large portion of the 6th grade joins them for their daily office hours, which they’ve structured as an online class, and many students consistently turn in their daily assignments.

“Some of the students have been thriving with this work from home life. It’s great to see 12 year olds working at their own paces, meeting deadlines from their home, utilizing online platforms to download their work, and completing assignments.”