Stella Jacobs Peterson G’49 passed away in November 2103.  Her family said of her passing: 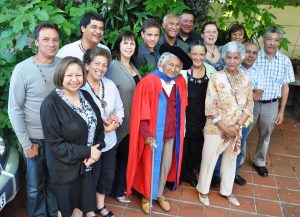 Today the world lost a truly rare and remarkable woman, who guided and impacted the life of so many, especially in South Africa.  Stella Jacobs Petersen, received two Masters Degree from Syracuse University, one on Science and the other in Education, and was the first woman of color from South Africa  to be awarded a scholarship to study abroad.  She was offered many teaching positions in the US upon receiving her degrees – from Cornell and others – but chose to return to South Africa to “her Mother-Land”.  Upon returning she was not able to teach in University, because of Apartheid, and instead taught  High School students for over 35 yrs, as one of the most dedicated and impactful  teachers ever known.  She fought an uphill, passionate and courageous battle, for slots in universities for so many woman of color to be able to follow their dreams of becoming professionals and significant contributors to a better South Africa.

Stella Jacobs Peterson: A trailblazer, in more ways than one