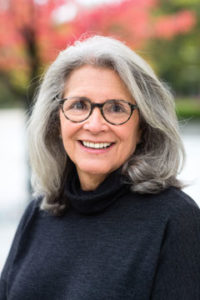 On the first day of her CLS 105 course, College Learning Strategies, Professor Emerita Marlene Blumin ’67 G’70 would ask the 100 or more students to put their name and an interesting fact about themselves on an index card.

On the second day of class, Blumin would know every student and start calling on them by name.

Syracuse University and the School of Education honored Blumin’s special dedication to students when she was presented with the Tolley Medal at the One University Awards Ceremony in April. The Tolley Medal—named for William Pearson Tolley, SU’s Chancellor from 1942 to 1969—recognizes strong scholarship and leadership in lifelong learning.

“Marlene’s focus is on students, no matter what they are doing or where they are,” says Morey Mossovitz ’08, G’10, an assistant athletic director at SU who was both a student and a teaching assistant in CLS and who tells the story about how she memorized each student’s name. “She is a teacher, a mentor, a friend, and family member all rolled into one.”

Blumin taught in the Department of Reading and Language Arts for 29 years, retiring to emerita status in 2017. She earned a B.S. in child and family studies and a master’s in reading education from SU and a Ph.D. in education from Cornell in curriculum and instruction. She directed SU’s study skills program and designed CLS.

Many know her as “Dr. B” and her lifelong relationships with generations of former students are as well known as the woman herself. While CLS may be known as a course for first-generation college students and student-athletes, its reach is University-wide.

“Remembrance and other University Scholars who were also honored at the One University Awards seemed delighted to share the stage with their former professor, waving to her as she left the stage after receiving the Tolley Award,” says Kathleen Hinchman, associate dean for academic affairs and a professor of reading and language arts. 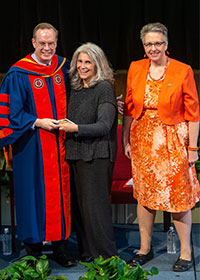 “My office near Dr. B’s gave me a perfect spot for witnessing both current and former students who sought her counsel each day,” Hinchman adds. That counsel included advice about class assignments, roommates, time management, coaches, studying, and life in general.

Matt Azoulay ’94 remembers academic success all the way until he got to college. In his first year, he concentrated on his social life and was failing courses. “For the first time in my life, I was not successful and was lost. And I was quitting on myself,” he says.

He enrolled in CLS, “and my life at Syracuse changed almost immediately. Dr. Blumin was the first teacher who engaged me, challenged me, had empathy for me, and held me accountable,” says Azoulay, who majored in political science, attended Widener University School of Law, and is a partner a partner at Bisgaier Huff law firm in Haddonfield, New Jersey. “She invested in me. With that investment came direction, hope and ultimate success, not only academically but emotionally as well.”

Blumin describes CLS as, “a student-centered pedagogy. The shift for their learning was clearly from the instructor into the hands of the student.” The course’s goals were to help students increase their academic confidence, support them in taking academic risks, and internalize learning strategies to apply in their academic careers and their lives beyond.

Many times, Mossovitz recalls, students would come to Blumin and ask, “How should I learn?”

“The response was always a question back asking them about themselves. The true quality of CLS and Marlene is not telling you what you need to do but about helping you find yourself as a learner in the process,” says Mossovitz, who majored in psychology, with a minor in educational studies, and received a master’s degree in student affairs counseling.

“Her mantra has been, ‘If you continue to do what you always have done, you will continue to get what you have always gotten.’This idea was true for all types of students from those on probation to those in the honors program.”

These questions helped students develop skills to use anywhere.

“She gave me the tools to be a better person,” Azoulay says. “In a simple academic context, she taught me organization, efficiency and how to approach problems and situations strategically and methodically. In other ways, the tools she taught me were holding myself accountable and understanding that you need to invest in the work required to get a positive outcome. You have to go all-in on things that matter to you.”

And her teaching did not stop when the class ended.

“I had an open-door policy: As long as the door was open, students were welcome to come in.

I was an instructor to all, but to some I was a mentor, a sounding board, a confidante,” Blumin says. “The need to vent, to trial balloon a choice or to express a vulnerability are not unusual for students who come to college not knowing what to expect or the first time away from home.”

Allen Griffin ’01 played basketball for four years for the Orange. He took the CLS course and majored in sociology. After a brief professional playing career, he embarked on a coaching trail that brought him back to SU in spring 2017 as the new assistant men’s basketball coach.

“The first week I was back in Syracuse, I stayed with Dr. Blumin instead of in a hotel room. That’s the kind of relationship we had,” Griffin says.

“She was one of my favorite teachers, my mom away from home, my therapist. I worked so hard in her class and probably got a C,” he laughs.

“I’d sit in her office after classes or between the end of classes and the start of basketball practice, and we’d talk about everything.”

Griffin applies that lesson about listening to his coaching role. “I always got time with her. I knew she cared about me, so the door to my office is always open to our players. I give the kids all the time and love she showed me.”

Yinan Liu G’09 served as a teaching assistant in CLS from fall 2012 to spring 2017. A doctoral student with a master’s in linguistic studies from SU, he’s developing a website for English as a Second Language students with Blumin as an advisor.

Liu says her influence on him is so great that he and his wife named their second daughter Marlene.

Liu’s is one of the multitude of examples of Blumin’s interest in her students’ lives. She attended athletic contests, dance recitals, art exhibitions, and charity events. She’d serve as a faculty advisor to sororities and as a character witness at judicial proceedings.

“She would sit right up front at any competition and when they were in class or came to see her in office hours you bet she would ask them a question about the game, things like, ‘Why do you think coach did that?’ or ‘What were you thinking when you went to score the goal?’’’ Mossovitz says. “I could always tell that it made the students feel special, that it wasn’t just her showing up but that she really had an interest in each of them.”

Late in each semester of CLS, when she was teaching memory techniques, Blumin would reveal how she memorized all the students’ names. She explained she created a crazy picture or story in her mind and related that to each person, a moment meant to inspire the class, Mossovitz says.

“This showed students that what she was teaching them was practical, possible, and allowed them to do amazing things.”