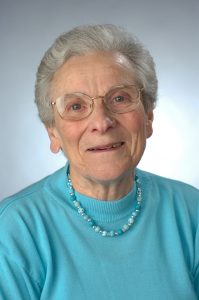 Joan Burstyn surprised herself when she was asked to reflect on how she has spent her life since retiring from the School of Education in 2005. “I was quite amazed at all the things that I have been involved with when I came to think about it all,” she said. Burstyn was School of Education dean from 1986 to 1989 and is professor emerita of cultural foundations of education and of history.

She’s been a poet, a philanthropist, a women’s rights activist, a student of contemporary Jewish thought, a radio host and producer, and continues to write and give lectures on her life. Now that she is past 90, she and her husband, Harold— a retired patent attorney and adjunct professor in the College of Engineering and Computer Science—have moved from Syracuse to Madison, WI, to be near family.

“I guess I am expressing my life, so that each poem represents a moment in time,” Burstyn says of her lyrical free verse.

“I still recall a short poem I wrote when I was about 8 years old. As a teen I kept the poems I wrote in a book,” says Burstyn, born in Leicester, England, and educated at the University of London.

Summer residents of Woods Hole, MA, on Cape Cod, heard Burstyn give poetry readings for years at the public library. The Burstyns first visited in 1961, when Harold, a graduate student at Harvard University, had a summer grant to work at the Woods Hole Oceanographic Institute. Burstyn family members still spend time there, almost 60 years later.

Burstyn is a frequent guest on the Cape’s public radio station WCAI, where she’s recently discussed the impacts of war on a poet and her family and a poet’s observations of the Israeli-Palestinian conflict.
Her radio career extends back to her days at Syracuse University. Until 2007, she served as volunteer host and producer for WAER’s weekly program “Women’s Voices Radio.”

“I learned while working with WAER how to edit radio interviews, which I found a fascinating new skill,” she says.

She was an active council member and now an advisory council member of Women Transcending Boundaries, a group of women founded in Syracuse after the 9/11 terrorist attacks that describes itself as “women from many faith and cultural traditions seeking to nurture mutual respect and understanding.”
Her faith sustains and fascinates her.

“Since I retired, I have been deeply involved with increasing my own understanding of Judaism,” Burstyn says. For several years she studied with Gershon Vincow, former vice chancellor for academic affairs at Syracuse University, and their collaboration resulted in a book on their form of self-directed learning, Searching for God: Study Partners Explore Contemporary Jewish Text, published in 2011. “Since we had not recorded our actual discussions of the books by contemporary authors that we studied, we recreated our discussions in the form of letters to each other,” Burstyn says.

Burstyn remains a sought-after presenter. A former president of the organization, she addressed the 2017 American Education Studies Association annual meeting. She shared her experiences growing up and surviving the Blitz in London during World War II in presentations in Syracuse and Woods Hole in 2018, and again in Madison in 2019.

In the presentation titled, “Growing Up in London in World War II,” she reads excerpts from her 1944 diary. She kept a diary from 1943 to the end of the war and beyond.

“Over the years since then, I have, in a desultory way, continued to keep a diary on and off. There are moments in time when I straighten out my thoughts or even develop new ideas by keeping a diary.” She hasn’t stopped writing.

Burstyn has published her third and fourth books of poems, Path into the Sun (2009) and Treasures Stored for Winter (2014), and her talk on surviving the Blitz can be found on YouTube.