“Jenna is the greatest pitcher to ever come through SU and the BIG EAST. She is a world class pitcher and I am happy for her. I think she was feeling a little bit of pressure today and UConn came out hot, but Kuwik came in and pitched great. She pitched great all weekend and it is awesome to be able to throw two players out there like that.” 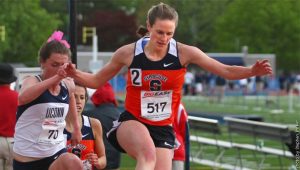 Another senior physical education major, Katie Hursey, was named the Women’s BIG EAST Track Athlete of the Week on Tuesday after winning the 3000-meter steeplechase at the Larry Ellis Invitational in Princeton, N.J.

This is the first honor of the season for Hursey, and second in her career. Hursey led four Orange runners with top-ten finishes in the 3000-meter steeplechase last weekend, finishing with a time of 10:16.57. She also holds the school record in the same event (10:08.44).

Hursey has already qualified for next weekend’s BIG EAST Championship in Tampa, Fla. and currently holds the conference’s second fastest time behind teammate Heather Stephens. Her time at Larry Ellis last weekend is currently the 17th quickest time in the nation this season. Hursey and the Orange will be back on the track this weekend for the Penn Relays, which begin on Thursday in Philadelphia.