The School of Education and the Maxwell School of Citizenship and Public Affairs hosted “A Conversation with an Educator Leading a City” on Saturday, October 20, 2018 as a part of Orange Central 2018. This event brought together Jeri Muoio G’83, mayor of West Palm Beach, Florida; Marcia Baldanza ’86, adjunct professor at Virginia Tech; and Amy Ellen Schwartz, professor of economics and public administration and international affairs at the Maxwell School.

Alumni from across Syracuse University came to hear Mayor Muoio talk about her experience as mayor of West Palm Beach, Florida for the last seven years. She has worked closely with the Palm Beach County school district, including creating a partnership school with the district based on community feedback. Muoio was also previously assistant superintendent of the Chappaqua Central School District.

Muoio and Professor Schwartz also discussed other aspects of public policy that fall under the mayor’s purview, such as food insecurity that extends to children in public schools, Muoio’s efforts to share city and school data publicly online, and the creation of the first Office of Public Life in the country, which makes sure public spaces are accessible and friendly to both residents and visitors. 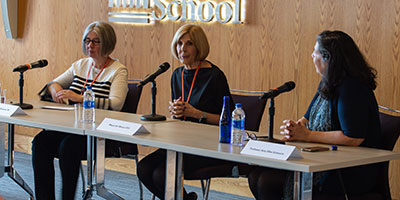