“I’m either a slow learner or a lifelong learner,” says Berger, Heckert Professor of Reading and Writing emeritus at Miami University (Ohio), who lives in Savannah, Georgia. Since moving there in 2006, he’s audited more than 10 classes at what’s now the Armstrong campus of Georgia Southern University. 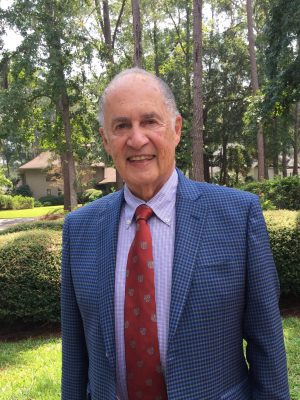 Last spring, Berger, 83, was enrolled in a course on modern China. Last fall’s course was on Latin American politics.
After a brief newspaper career followed by a job teaching high school English and reading, Berger received a doctorate from the School of Education in 1966. He taught at Southern Illinois University, the University of Alberta, the University of Pittsburgh and Miami University, where he was Heckert Professor for 18 years.

Retiring from Miami University didn’t mean the end of Berger’s teaching career. A few months after arriving in Savannah, a chance meeting with a former colleague led to a five-year teaching job at Armstrong Atlantic.

At Miami University, he began a program called Teens for Literacy, which encourages inner-city middle and high school students to become involved in promoting literacy in their school or community. The program has been used in more than 100 schools throughout the country. He introduced it at Armstrong Atlantic State University after his arrival in Georgia, and the program remains active in southeast Ohio and southeast Georgia.

Berger is enthusiastic about his student role in the classroom. He penned an op-ed for the Savannah Morning News in 2017, under the headline “You’re Never too Old to Go to College.” He recounted the alert Visa sent him about use of his charge card: “The first time I had bought or rented books at the Armstrong bookstore a few years ago, I happened to glance at my cell phone. Visa had sent me a message informing me that they were freezing my account because someone had used my card at a university bookstore. I contacted Visa and told them it was OK, that I was the student who used my card. I thought that was sweet that they wondered why someone so old was on a university campus.”

He’s also a member of the Academic Success Panel of the United Way of the Coastal Empire and added to his knowledge by taking 40 hours of training to serve on the Chatham County Board of Equalization, which allows property owners to appeal the values on their property.

Lifelong learning extends far beyond the classroom. For Berger, it took him to Wassaw Island, off Savannah, for a week observing female loggerhead sea turtles lay their eggs. He was one of five observers invited. They conducted all observations at night, four forays for each team each night looking for female turtles crawling from the water up the beach to excavate an egg chamber.

“What I remember,” says Berger, “is that not too many of the hundred plus little guys survive.”

Activity at a public library is natural for someone committed to literacy. For six years, the last two as chair, Berger served on the Live Oak Public Libraries (LOPL) board of trustees, which oversaw 19 libraries in three counties. He then spent six years, one as secretary and one as president, on the LOPL Foundation.

An annual highlight was the Savannah Children’s Book Festival. “The one-day festival was free to the public in a large downtown park and attracted about 35,000 people of all ages and backgrounds, making it one of the largest, if not the largest, one-day children’s book festival in the U.S.,” Berger says.

A published poet, Berger was personally prescient when he wrote in a poem—“Deception,” printed in the New York Herald Tribune in 1960—“Warm are his words; alive his mind:/His aged body lies.”