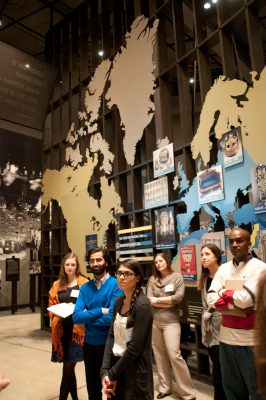 Teaching about the Holocaust provides the opportunity to examine the basic moral issue of what it means to be a responsible citizen in a democratic society. Studying the Holocaust brings understanding to the ramifications of prejudice, racism, and stereotyping, and the value of encouraging tolerance and diversity in society.

The Spector/Warren Fellowship is for undergraduate and graduate students preparing for careers in education, counseling, or student affairs. During this 5-day intensive program at the Holocaust Museum Houston, students will engage with nationally recognized scholars and Holocaust survivors to explore historical, pedagogical, and personal contexts for understanding the Holocaust. Fellows will benefit from enhanced knowledge including:

The Fellowship will cover all expenses including round-trip transportation, housing, meals, special events and classroom materials.

More from the Fellowship:

“There are only a few programs I have participated in which I can say that I have memories that I will never forget. It is hard to describe the emotion of looking into the eyes and hearing the voices of those who survived the horrors of the holocaust. Now I can say and really mean, never forget.”
– Justin Freedman, 2014 Spector/Warren Fellow

The Warren and Spector families established the Fellowship for Future Educators to honor Naomi Warren, by preparing future teachers with approaches for bringing Holocaust education into the classroom. Naomi Warren overcame her own personal tragedy to become a symbol of perseverance, determination and success. Born in Eastern Poland, she survived three concentration camps during the Holocaust. Her first husband, Alexander Rosenbaum, died in Auschwitz in 1942, but Naomi survived the war and immigrated to the United States in 1946. She married Holocaust survivor Martin Warren, and together the couple raised a family and established a successful import company. After her husband’s death, she continued to run the business until her retirement in 2002. She was awarded the Tolley Medal for Lifelong Learning by the School of Education in 2013.

Naomi passed away in October 2016. As our students go out into the world, they will carry Naomi’s story, her spirit, and the meaning of being an ally to next generations.