The Education Living Learning Community gives first-year education students the tools they need to successfully navigate their transition into college, and leads to lasting connections.

As the saying goes, “You can pick your friends, but not your family.” And since in most cases the friends we make in college become family, it serves us well to choose wisely. It can be tough to find those life-long life-long connections with people who at first glance may seem nothing like you but who have the ability to expand your horizons, challenge your thinking, and test your pre-conceived notions. This is exactly what Sara Soldovieri ’18, G’19, Ravyn Johnson ’18, Ben Rodriguez ’18, and Simon Wechsler ’17, G’19 were able to find in each other by living in the Education Living Learning Community (ELLC).

Established almost two decades ago under the guidance of Amie Redmond, senior assistant dean in the Office of Academic and Student Services, ELLC provides a space for School of Education students to have a close-knit and supportive environment in a residence hall.

“I had a lot of anxiety coming in, there always is when you’re starting something new,” says Sara Soldovieri. “Plus, I had just come out right before college so there was a lot going on. The ELLC was really a lifesaver.” On top of this pivotal moment in her life, Sara was moving halfway across the country from Wisconsin and didn’t know a single person at Syracuse University as she entered her first year. What she did know with certainty was that she was passionate about inclusive education. She had a close childhood friend with Down syndrome and growing up they attended primary and middle school together. But once they hit high school, her friend was no longer able to attend the same school as her. “I saw first-hand the benefits of inclusive education as well as the regression that can occur without it,” says Sara. “I knew I was passionate about education and would get along with people who are also passionate about it.”

As expected, one of her first friends in the ELLC did share her passion for education, but it was her ability to give Sara a different vantage point on it that brokered their new bond. Ravyn Johnson, who came to Syracuse from Chicago explains, “I grew up in all-black neighborhoods, and went to all-black schools. I had to realize I grew up much different from others, so that meant that we didn’t have the same opinions and experiences.” Ravyn learned about the ELLC in Flint Hall while researching the University’s residence halls and knew it would be a good way to make new friends but also to focus on her major. While the making friends part came easily, it was difficult to let down her guard to form the genuine relationships she was looking for. “I didn’t realize how hard it would be to communicate my feelings and emotions with a diverse group of friends,” she admits. “I think for most in the learning community, communicating was easy, but for me, I had to learn not everyone communicates the same way, and I had to really dig deep to get to know the others well,” she explains. “Once I was able to do that, we started to really bond as a group.” 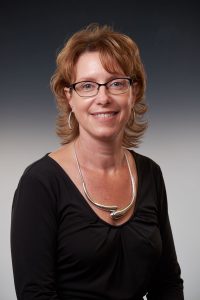 Having worked for Syracuse University for 27 years and in student services for 24 years, Senior Assistant Dean Redmond recognized the value in learning communities early on, especially for future educators. “When students are placed in an environment to have the opportunity to support each other academically, personally and socially, it gives students a positive foundation for their transition to college, which sets the stage for a successful college journey,” she explains. Looking back now, Ravyn couldn’t agree more. “The ELLC and learning communities, in general, give students a chance to make their first-year experience more meaningful and productive given how fast the academic experience goes.” Of her experience working with Senior Assistant Dean Redmond, Ravyn says, “She is like a second mother, nurturer, mentor, and will help you throughout your four years if you are struggling.”

Learning communities are based on the philosophy that early interaction with staff, faculty and peers is an indicator of a successful undergraduate experience. Through service learning, shared courses, faculty guest speakers and social activities, learning communities give first-year students a living environment that supports learning both inside and out of the classroom.

Sara describes floor dinners that were initially organized by their RA but quickly became something that they took ownership of. She also recalls the support her new community provided academically. “We were all in similar classes so we always had a built-in study group. We could do homework together and walk to class together.” It was through these social and academic experiences that Sarah and Ravyn formed a connection with roommates Ben and Simon. As their first year progressed, the four of them formed what would become their chosen nuclear college family. 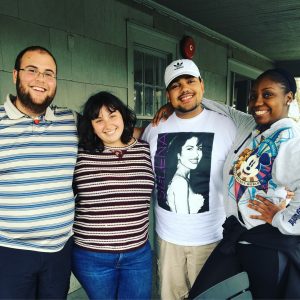 “We might not have clicked or found each other if we did not have the ELLC,” Ben notes, emphasizing their distinct interests and tastes, especially when it came to hobbies, music, and TV shows. “Those things would not have brought us together because they’re so different, but I’m similar to each of them in other ways. When you bring us all together, we click.”

A self-proclaimed homebody, Ben was the first in his family to move away for college and was nervous. “I didn’t know how hard or easy it was going to be for me to make friends, so the learning community helped me ease those stressors a bit,” he says. He adds that it gave him a sense of security knowing he would be with all first-year students.

By the time they were heading into sophomore year, Sara, Ravyn, Ben, and Simon had formed a bond that over the next three years would not fracture despite new living arrangements, new love interests, and busy schedules. They stayed in nearly constant contact through an active group text chat and had weekly Sunday dinners. Sara and Simon, who were in the same major, continued to study and do homework together and they all decompressed by watching a movie together at least once a week. Throughout their time at Syracuse, they supported each other through all the ups and downs, stressful finals, breakups, and family matters back home. Even as seniors, with graduation on the horizon, they counseled each other through decisions about their next major steps in life. To top it all off, they splurged on a senior spring break trip to Disney World to “celebrate their four-year friendship,” says Sara. “It was amazing, we had so much fun.”

Since their 2018 graduation, the same group text continues daily, FaceTime calls are made monthly, and the friends have committed to a group trip once a year. This year’s trip was to Milwaukee to visit Ravyn at Marquette University where she is pursuing a master’s in student affairs in higher education. Sara and Simon remained at Syracuse University where Sara earned a master’s in inclusive special education and Simon graduated with a master’s in mathematics education. Sara also works full time at the National Down Syndrome Society and Ben is now at the University of Massachusetts Amherst in the school counselor education master’s program.

Though their lives will continue to take them in different directions, all are committed to maintaining the bond that originated with the ELLC program during their first year. As they look back on how the ELLC affected their lives beyond freshman year, Ravyn offers, “Everything I do, I think about my friends. If something good is happening in my life, they are the first phone call I make. If I’m not feeling well, I know that I can count on them to help me get through anything.”