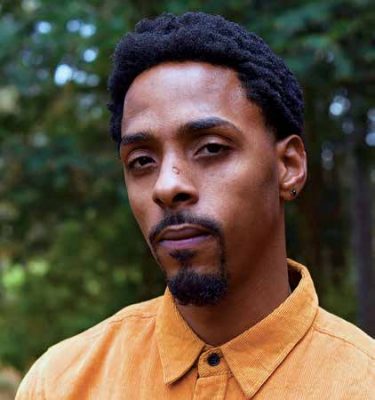 Evan Starling-Davis’ G’20 journey of discovery began when he saw the first play he wrote performed in the Young Playwrights’ Festival at Syracuse Stage. He started to understand the depths of storytelling and the meaning of teaching that spring, when he was a Nottingham High School senior.

That journey has taken him from the Writing Our Lives program, to a master’s degree in curation and museum-based storytelling, to the first Writing Our Lives Literary Arts Fellowship, to a fellowship for rising playwrights of color, to the Inaugural Maison Baldwin Writer-in-Residence program in France, and back home to the Syracuse community and into the School of Education’s doctoral program in reading and language arts. He calls himself a storyteller first. His understanding of teaching evolved out of that interest.

“What awoke me to the possibilities of written and spoken word was the responses I saw due to my storytelling. My voice had impact, and I never knew that,” he says about that first play. In 2009, Starling-Davis entered Syracuse Stage’s annual festival for high school playwrights; his was one of the winning entries. At the event, Marcelle Haddix, now Dean’s Professor and chair of the Department of Reading and Language Arts, walked up to him, introduced herself and recruited him to Writing Our Lives, her program that provides local youth opportunities to write, create, produce and share their stories. She’s now his doctoral studies adviser.

That summer, through a partnership between Syracuse University and the Syracuse City School District, he took two college-level courses. One was a class on playwriting with Len Fonte, a retired Nottingham drama teacher who worked with him on his first play. The other, with Haddix, looked at graphic novels and other visual literacy.

Two years after graduating from SUNY Purchase in 2013 with a B.A. in liberal studies and the arts, he returned to Syracuse. He’s been a teaching artist and playwriting instructor at Syracuse Stage, working with Young Playwrights’ submissions; a mentor and workshop facilitator for Writing Our Lives; in 2017 the first winner of the Writing Our Lives Literary Arts Fellowship; and a camp coordinator at Creative Arts Academy, the Community Folk Arts Center’s summer arts and culture camp. All the while, he was actively hanging art shows throughout Central New York and New York City.

Becoming a teacher snuck up on him. “I saw education as a one-dimensional tool for the longest time—teaching as a byproduct of that. I didn’t gravitate to it. Once I began understanding education with as much complexity and enthusiasm as I saw a story, I started to see how teaching could be utilized more effectively.” His perspective has changed.

“I see in teaching something urgent and necessary for navigating the unknown, storytelling as crucial as logic,” he says.

Starling-Davis believes that an effective teacher should follow James Baldwin’s exhortation to “go for broke” (in a 1963 speech entitled “A Talk to Teachers”). “Over the last few years, I’ve come across many interpretations of what it means to ‘go for broke,’ what that bravery, and understanding, and resistance, responsibility and love look like,” he says.

Playwriting remains at the heart of Starling-Davis’ storytelling and teaching.

For its 2018 Backstory program, Syracuse Stage commissioned him to write a one-man play, Airborn, the story of the Tuskegee Airmen. Backstory is a touring program that offers an interactive and creative history lesson for upper elementary students through adults. That same year, he received a CNYArts decentralization grant for another play, Madness, In The Clearing Of Blue.

He took Madness to New York City that summer after being selected for INKtank, the Rising Circle Theater Collective’s play development program for playwrights of color.

In 2019, he was among 10 writers selected for the Inaugural Maison Baldwin Writer-in-Residence in Saint-Paul de Vence, France, where James Baldwin’s house had become a writers’ colony. While he was selected to work on Monuments, a play from his developing cycle, Evan also worked on Homegoing (2020), a film script-in-progress that had advanced to round two of an application for a Sundance Institute Lab Fellowship. While he and the director Carlton Daniel Jr. G’16, an M.F.A. film production and dramatic writing SU alumna—didn’t receive the Fellowship, they later were awarded $40,000 in the inaugural CNY Short Film Competition. The short film has already been screened/accepted at three film festivals, as Carlton and Starling-Davis undergo pre-production for the feature iteration.

In May 2020, Starling-Davis was named a 2020–2021 Graduate Student Public Humanities Fellow. The fellowship program, supported by Humanities New York, is a joint initiative between the Syracuse University Humanities Center and the Central New York Humanities Corridor.

Starling-Davis closes each email message with a Baldwin quote: “Not everything that is faced can be changed, but nothing can be changed until it is faced.” The most important change he’s facing now is balance.

“How do I balance the identities I have, the spaces I navigate and the art I create, without losing who I am?” he says. “Change is inevitable, my mom constantly reminds me, but how do I change and retain a sense of self.”

He questions this as he states his intentions for his life post-doctorate. “I’ll be telling stories, he says. “I’ll be doing that for the rest of my life.”