School of Education senior Lisa Kranz, studying music and education, has been selected as a 2015-16 Remembrance Scholar. Kranz received the prestigious award last May and recently took part in Remembrance Week, a yearly event at Syracuse honoring the thirty-five students who died in the PanAm Flight 103 explosion over Lockerbie Scotland in 1988. 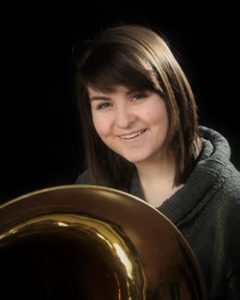 Kranz first learned about the tragic event her freshmen year. Kranz would walk past the remembrance chairs, the chairs placed on the quad in formation of where the students sat on the plane, and read the story behind their meaning. It was just heartbreaking, says Kranz. From there, she says, she did a lot of online research, visited the PanAm 103 archives and knew she had to apply.

Each Remembrance Scholar is matched with one of the thirty-five Syracuse students who were lost in the tragedy. Throughout the year, scholars learn about that student. A Remembrance Scholar is about service and education, and celebrating lives, says Kranz. This year’s actions included preparing food for the poor, a celebration of life concert, a panel on terrorism during the internet age, and a rose laying ceremony at the Wall of Remembrance. While the largest culmination of service takes place during Remembrance Week, says Kranz, the service does not stop once the week is over and that being a part of the overall community of 800 past and present Remembrance Scholars is significant. “All around,” says Kranz, “it has been an incredible experience.”

Kranz was matched with Syracuse University student Shannon Davis. At the time of the PanAm 103 disaster, Davis was a junior in Syracuse University’s College for Human Development where she studied child development. Davis’s dream was to operate a day-care center for young children after she graduated. Kranz shares Davis’s love for working with children and hopes to one day teach middle school band or elementary general music and study the cognitive effects music has on young people.