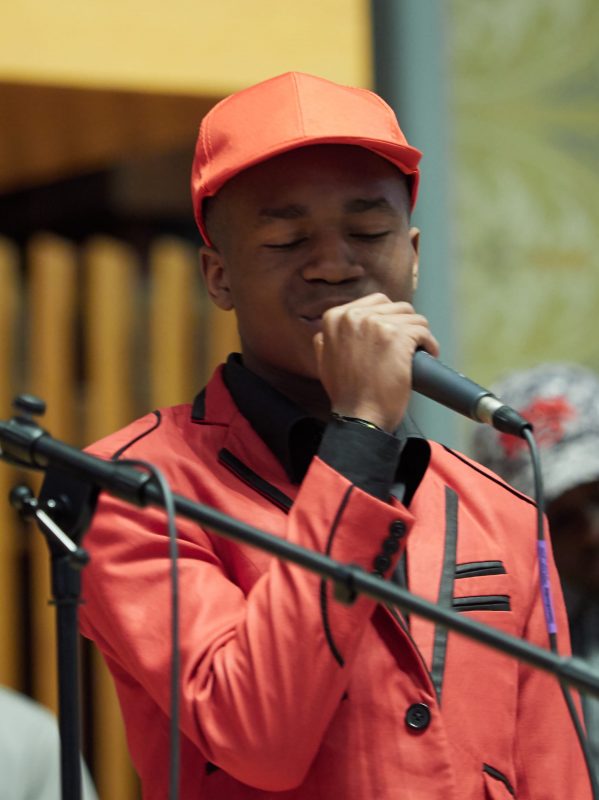 Making music builds communities. And nowhere is that more important to David Knapp, an assistant professor of music education, than in the refugee population in Syracuse.

Knapp is the founder of the New American All-Stars, a rock band of refugee students from the Catholic Youth Organization’s Refugee Youth Program. It’s the first phase of his Music in Community project, which seeks to redefine music teacher education by embedding culturally responsive teaching practices in the field placements of music educators.

“Research on the psychosocial outcomes of community music demonstrates the capacity for music making to develop self-efficacy and group affiliation among ensemble members,” says Knapp, who holds dual appointments in the Setnor School of Music and School of Education. “As you can imagine, these outcomes are especially important for refugees who have arrived in our community after traumatic experiences.”

Last year, New American All-Stars joined 14 undergraduate and graduate students in the Secondary General Music Methods course for an inaugural Music in Community concert in Setnor Auditorium. Twelve students—coming from Afghanistan, Congo, Jordan, Rwanda, Sri Lanka, and Syria—comprise the core of New American All-Stars. They range in age from 13 to 18.

“The New American All-Stars provides a safe place for them to grow with each other and develop necessary inter- and intrapersonal skills to be successful in their new home,” Knapp says.

In the past five years, music education opportunities have declined by 19% in the Syracuse City School District, due to budget cuts, as the minority and refugee populations have swelled; the refugee population in Syracuse has soared to more than 10,000, with students from more than 70 countries speaking 72 languages. 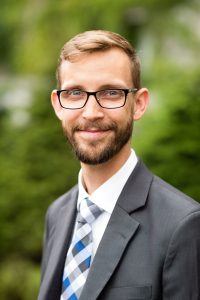 Knapp describes it as “an ambitious five-year plan to develop community programs that serve our undergraduate and graduate students with diverse pre-service learning experiences as well as directly serving community needs. This requires developing and coordinating relationships with community partners, like the Catholic Youth Organization.”

In MiC’s pilot semester, no SU students were placed to teach the All-Stars. This year, the band became a placement site for the sophomore-level observation course and the junior-level secondary methods course. “I’m looking forward to documenting how the experiences in this rich environment will affect students’ teaching,” Knapp says.

Next steps for MiC include a studio production collaboration with Nottingham High School to support music-making activities at the school and expand SU students’ capabilities in studio production. Knapp secured instruments from Trinidad for a steel band initiative and he’s looking for a community partner.

Knapp’s work in community music dates back to his time at Florida State University, where he received his doctorate of music education. As part of his research, he founded a band at a shelter for people experiencing homelessness—The Shelter Band—which ended up performing at several area events and even completed two studio album recordings. Knapp’s research shined a light on the many emotional, cognitive, and social benefits that music education can produce.

“At the core of all the initiatives within the MiC program is the belief in the vernacular music making activities of everyone in our community. This work begins with supporting students’ musical skill development and extends into fostering personal literacies through songwriting,” he says.

“During the pilot year with the New American All-Stars, the band worked on original songs and had the opportunity to record two songs at SubCat Studios. This compositional process is student-centered to activate the students’ own experiences through song.” 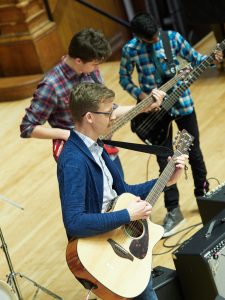 The North Side CYO, where the All- Stars are based, serves about 70 youth on a daily basis in its afterschool program. As many as 15 students participate in the band, says Maddie Wood, refugee youth coordinator at Catholic Charities of Onondaga County and refugee youth supervisor at the North Side CYO.

“The trip to SU was inspiring to the youth, and I believe the performances make the youth feel valued and important,” Wood says.

From her perspective, the need is great for more donated instruments and more mentors. The All-Stars perform on a variety of instruments—including electric guitars and basses, drum set, and keyboard.

“Many of our youth want to practice their songs at home but cannot afford to buy musical instruments. We would love for each member to have their own instrument to take home,” Wood says. “The youth also need mentors and teachers to continue to inspire and be there for the kids.”

Through the band, the All-Stars can tell their stories as refugees, says Knapp.

“The band doesn’t so much teach them about their own heritage and experiences as it does provide a structure for them to express their experiences. They know so much, we only have to deliver learning experiences that gets them interacting with their knowledge more deeply.”

The achievements of students like Emmanuel, a native of Congo who spent many years in Burundi and Rwanda, thrill Knapp.

“Emmanuel is an avid singer. During a recent rehearsal, he asked if he could borrow a guitar to take home. When he came back the following week, he had written an entire song in English and Swahili called ‘My Life,’ about his experiences leading up to coming to the U.S. It was amazing: great melody that he wrote, nice chord progression that he wrote and taught himself how to play on guitar, and poignant lyrics.”

The Kreischers set up their fund to support the Teaching English Language Learners program, with preference for literacy collaboration with the Music Education program on community music. Jack Kreischer is the founder of Kreischer Miller, a regional certified public accounting firm in Horsham, Pennsylvania, and one of the largest independent regional CPA firms in the country.

They have two children: Jennifer Kreischer ’88 and Brian Kreischer ’91.