The pursuit of social justice propels Martín Alberto Gonzalez—in his writing, his teaching, and his research. 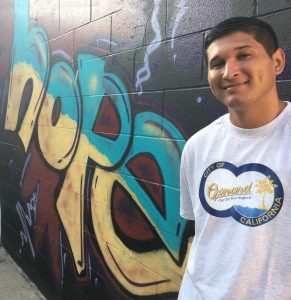 On campus and off, Gonzalez, a Ph.D. student in Cultural Foundations of Education in the School of Education and Syracuse University’s first Ford Foundation Predoctoral Fellow, seeks to empower people like him—the youngest of seven children in a first-generation Xicano family from Oxnard, California, and the only one to attend a four-year university.

On campus, he’s involved in Xicanx Empowering Xicanx, a student organization that hosts dialogue circles and film screenings “to not only educate the campus about the Mexican American culture, but also address various forms of oppression,” he says. Off campus, XEX members volunteer at La Casita Cultural Center on Syracuse’s Near West Side and at the Workers’ Center of Central New York, which advocates for marginalized, low-wage workers.

“Growing up in Oxnard, an underresourced, predominantly Latinx community, I was exposed to many injustices, yet I didn’t know how to make sense of them,” Gonzalez says. “I observed my older siblings and my community’s talents and interests be denied and repressed via their schooling at the hands of inequitable schooling practices and culturally irrelevant curriculum.”

“I took multiple ethnic studies courses that provided me a framework and vocabulary to help make sense of my experiences and observations. Thus, I became interested in social justice issues in and out of the classroom,” says Gonzalez. He majored in sociology and minored in psychology.

At La Casita, he is the Dual Language Literacy Program director and a Cultural Foundations of Education intern. As a staff member of the Intergroup Dialogue at SU, he co-facilitates the Lit Arts afterschool program. He and Romo, a fellow doctoral student in CFE, have co-facilitated workshops at the Syracuse City School District’s Johnson Vocational Center.

“We addressed topics related to race, gender, class, sexuality, and other forms of oppression,” Gonzalez says. “Conversations and activities had in this space inspired critical thinking and raised consciousness as it pertains to social injustices the participants face on an everyday basis growing up in Syracuse. We acted on our awareness of injustices and produced knowledge through various means such as poetry/spoken word, drawing/painting, and writing.”

Gonzalez’s academic interests are race and education, community cultural wealth, and the experiences of students of color in a university setting. In 2017, he was one of 67 predoctoral students nationally to receive a Ford Foundation Fellowship, which seek to increase the ethnic and racial diversity of the nation’s college and university faculties. He is researching the experiences of students of color at a predominantly, historically white university.

“I aim to better understand the experiences of Mexican American undergraduates and the role ethnic-based organizations play in their college experience,” he says.

He explains the Xicano identity and its political significance.

“Being a Xicano is an intentional way of viewing and navigating life. I have come to know what it means to be Xicano as a raised political consciousness that strives for a more just society for other Xicanx people,” Gonzalez says.

“Some people use Xicanx interchangeably with Mexican American, but I disagree with this assumption. For me, to be Xicanx means that you are politically engaged and active and constantly challenging all forms of oppression, including internalized oppression, for the betterment of your community.”

The first “X” pays homage to indigenous roots; the “X” at the end is considerate of those who do not conform to gender norms.

Gonzalez is the author of 21 Miles of Scenic Beauty…and then Oxnard, a story collection that highlights various injustices in his city, among them inequitable schooling practices, gentrification, and segregation.

In graduate school, he discovered the work of Michelle Serros, who wrote humorous poems, short stories, and young adult novels about growing up in Southern California. Her titles included Chicana Falsa and Other Stories of Death, Identity, and Oxnard and How to Be a Chicana Role Model.

“She was an author from Oxnard. I couldn’t believe that she was a Xicana raised in Oxnard, but immediately I fell in love with her work and her work inspired me to write a book,” Gonzalez says.

The book expresses his pride in Oxnard, in spite of its stereotypes. The city of 205,000 on the coast west of Los Angeles is more than 70 percent Hispanic or Latino and known for its gangs. The title refers to the well-known highway signs in Malibu, the city immediately east of Oxnard: “Malibu… 21 Miles of Scenic Beauty.”

Then comes Oxnard, for which Gonzalez envisions a sign saying, “Oxnard…15 Miles of Beautiful Brown People.”

Despite its wonderful everyday weather and beautiful surf-ridden beaches, Oxnard, California, has a reputation of being dangerous and demoralizing due to its gang presence. In this book, 21 Miles of Scenic Beauty… and then Oxnard: Counterstories and Testimonies, Gonzalez takes this reputation head on through a series of social justice-oriented stories loosely based on his experiences and observations growing up in Oxnard as a first-generation Xicano.