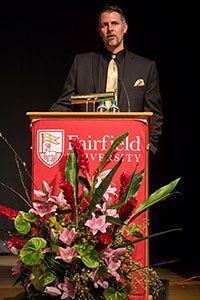 Bryan Ripley Crandall G’12, an alumnus of the English Education Ph.D. program in the School of Education, received the Martin Luther King Jr. (MLK) Vision Award from Fairfield University on January 27, 2016. Crandall is currently the Director of the Connecticut Writing Project at Fairfield University and assistant professor in the Graduate School of Education and Allied Professors (GSEAP). The Dr. Martin Luther King, Jr. Vision Award is given in recognition of tireless effort to instill and inspire the teachings and ideals of Dr. Martin Luther King, Jr.

“Bryan’s dissertation, was a wonderful example of engaged scholarship,” says Kelly-Chandler-Olcott, associate dean for research at the School of Education, and former chair of the Reading and Language Arts department. Says Olcott, “his commitments to caring, equity, and diversity were clear then, and during his doctoral program, and he has expanded upon them in his work at Fairfield and in the surrounding community.”

In accepting his award, Crandall spoke of the National Writing Project, which he said, “allowed him to invest in the voices, integrity, excellence, and creativity of K-12 teachers and students in marginalized communities and thanked the many people who helped him along the way including Chandler-Olcott, for guiding him towards scholarship.

Crandall has an extraordinary background in service and in the academy. He earned a B.A. in Literature from Binghamton University, a Masters in the Art of Teaching English at the University of Louisville, and a M.S. in Interdisciplinary Science through the Kentucky Institute for Environmental Education and Sustainable Development (KIESD). He completed additional coursework as an English Speaking Union Fellow at Cambridge University, a Fulbright Memorial Scholar in Tokyo, Japan, and a Humana Fellow at the Bread Loaf School of English in Middlebury, Vermont, and Santa Fe, New Mexico. In regards to service, Crandall has served on the Board of Directors for Hoops 4 Hope, a non-profit organization that has supported youth development throughout southern Africa, for over twenty years.

In 2007, Crandall was offered a doctoral fellowship at Syracuse University, where his dissertation, “A Responsibility To Speak Out: Perspectives On Writing From Black African-Born Male Youth With Limited and Interrupted Formal Education,” which followed the writing lives of eight young African-born men in and out of school, received a doctoral prize for research.