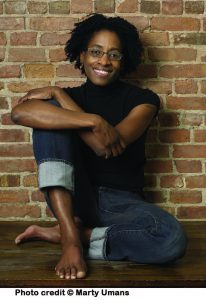 Jacqueline Woodson’s memoir, Brown Girl Dreaming, tells the moving story of her childhood in mesmerizing verse. In this talk, she guides audiences through the vivid poems from her book, sharing what it was like to grow up as an African American in the 1960s and 1970s, living with the remnants of Jim Crow, her growing awareness of the Civil Rights movement, and the joy of finding her voice through writing stories, despite the fact that she struggled with reading as a child.

Jacqueline Woodson is the author of more than two dozen books for young readers, she is a four-time Newbery Honor winner, a recipient of the NAACP Image Award, winner of the 2014 National Book Award, a three-time National Book Award finalist, a two-time Coretta Scott King Award winner and was recently named the Young People’s Poet Laureate by the Poetry Foundation. Woodson writes about characters from a variety of races, ethnicities, and social classes. Woodson’s books also feature strong female characters and she often writes about friendship between girls.