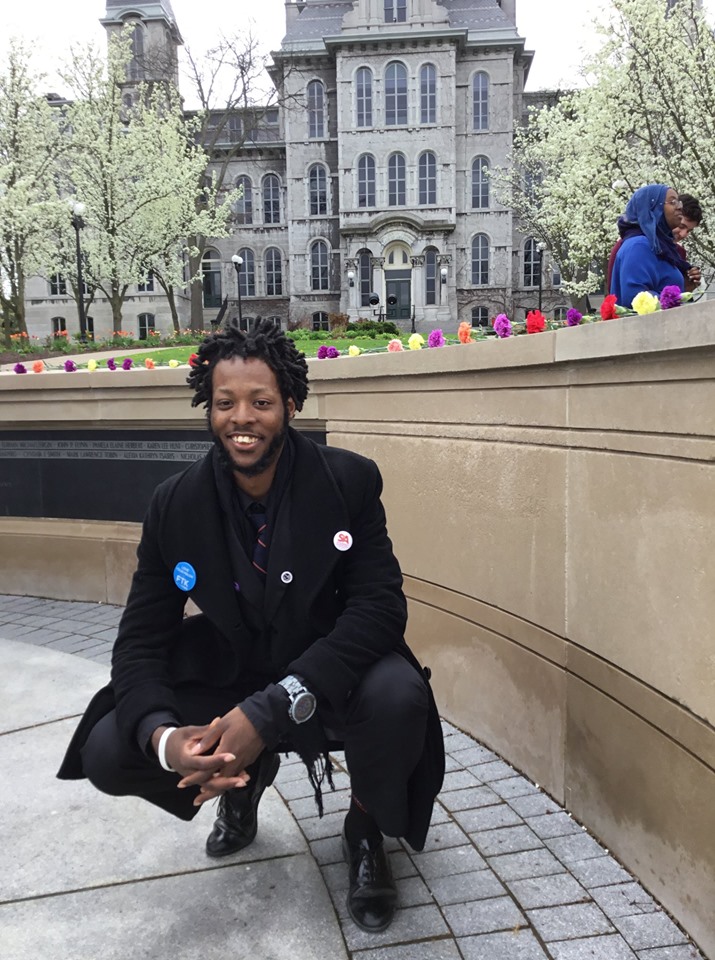 If you ask his friends what makes Cleo Hamilton an outstanding example of Orange spirit, his dedication and determination are two characteristics that stand out. Hamilton is entering his senior year at Syracuse University this fall with one of the highest honors a student can receive, being named a Remembrance Scholar, defying odds along the way.

Hamilton is attending Syracuse University through University College as an InclusiveU student, a School of Education initiative to enroll students with intellectual and developmental disabilities into a fully inclusive setting at Syracuse University. He audits classes with his peers, ranging from Managing the Sport Organization to Religion in Sports, has a part-time job off campus and volunteers for leadership roles with OttoTHON, Relay For Life, Student Association and more. He chose to major in sport management and will earn a certificate through Falk College next year.

After graduating from Nottingham High School in the City of Syracuse, Hamilton began receiving services from Onondaga Community Living (OCL), a community agency that supports people with disabilities to be able to live, learn and work in the community. He had always wanted to go to Syracuse University and, through OCL, was able to enroll in InclusiveU in 2016.

Hamilton, outgoing, independent and engaging, immediately participated in leadership opportunities in the program, advocating on Capitol Hill with his classmates, collaborating with the Executive Director Beth Myers on an article in a national journal on inclusive education and receiving the “Person of the Year” Award from OCL. He is active in the community and on social media and is quick to recruit others to volunteer on campus, often tabling at Schine Student Center for various organizations.

Hamilton says he decided to apply to be a Remembrance Scholar because he wanted to help the campus spread more awareness about the bombing of Pan Am Flight 103 over Lockerbie, Scotland. The scholarships were founded as a tribute to—and means of remembering—the 35 Syracuse University study abroad students who perished in the bombing. The sense of community was also a big appeal. “When I was a freshman, my friend Tori invited me to the vigil, where I saw everyone singing songs,” Hamilton says. “I went again last year.” 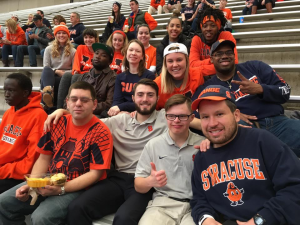 Tori Cedar, his friend and former Peer Trainer through InclusiveU, supported Cleo in his freshman year as he acclimated to college, attending football games and OttoTHON committee meetings together.

“When I got the news that Cleo would become one of the 35 Remembrance Scholars for the 2019-2020 school year, a wave of emotion came over me. A part of me was like ‘well yes of course, Cleo is a rockstar this makes so much sense.’ However, the bigger part of my emotion came over as I started thinking about what this all means,” Cedar says. “At InclusiveU, we all know Cleo is incredible, passionate, dedicated, hard-working, kind, strong, resilient, funny and the most caring man you’ll probably ever meet. But this proves that our students, our faculty, our administration, our society, and our world also see what we see. When Cleo got named as a Remembrance Scholar they saw the man we knew could get this scholarship and deserved the honor of being named a Remembrance Scholar from the beginning.”

At Hillel’s Israel Fest this past April, Hamilton asked for the Remembrance logo to be silk-screened onto a T-shirt, even before next year’s scholars had been selected. This type of deep passion for Syracuse University and for service was reflected in Hamilton’s application.

“He volunteers for many service-oriented organizations and activities. Because service to others is a key factor for successful Remembrance Scholars, Cleo emerged as a strong contender for the award. His level of support from both faculty/staff and outgoing Remembrance Scholars on the selection team was outstanding,” Mason says.

Rick Burton, David B. Falk Endowed Professor of Sport Management in the Falk College, was one of those faculty members who supported Hamilton in his application process.

“Cleo was a great joy to have in my SPM 225 class. We would often talk before class started and he filled me in on campus events and activities. I knew immediately he had dedicated himself to our Orange family,” Burton says.

Hamilton says one of his favorite classes so far was with Professor Burton. “We had to do a class project and presentation. This was one of my first times doing one in front of a class,” Hamilton says. “We chose the Philadelphia Phillies.” 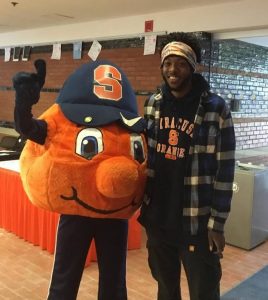 Going to games and meeting Head Football Coach Dino Babers inspired him to choose a major in sport management. Hamilton enjoys athletics and wants to work with a professional team after graduation. When asked what his favorite things about Syracuse are, he says going to games, making good friends and Mayfest stand out. He also spends time at Hendricks Chapel, and is an active member of the Syracuse Community Choir.

Professor Beth Myers, executive director of the Taishoff Center for Inclusive Higher Education and InclusiveU, was not surprised to learn that Hamilton was the first InclusiveU student to receive the prestigious award.

“When you meet Cleo, what stands out is his genuine commitment to the University and to his community,” Myers says. “Cleo’s passion to learn, to grow and to connect with others makes him an outstanding addition to the group.”

Hamilton is in disbelief that his senior year is coming up, but maintains his always positive outlook. When asked what the future holds, he says, “I want to move to New York City and work with athletes at Columbia University.”