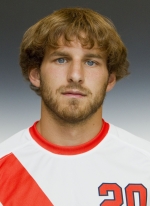 Sixty NCAA men’s and women’s soccer student-athletes who excel both on and off the field were selected as candidates today for the 2014 Senior CLASS Award in collegiate soccer. To be eligible for the award, a student-athlete must be classified as an NCAA Division I senior and have notable achievements in four areas of excellence – community, classroom, character and competition. Among the candidates is School of Education senior Chris Makowski ’15 (Physical Education ’15).

An acronym for Celebrating Loyalty and Achievement for Staying in School, the Senior CLASS Award focuses on the total student-athlete and encourages students to use their platform in athletics to make a positive impact as leaders in their communities.

Of the 60 candidates, 35 have grade point averages of 3.5 or higher, four are returning All-Americans and nine are on the preseason watch list for the Missouri Athletic Club’s Hermann Trophy, which recognizes the top player in collegiate soccer.

Each of the two candidate classes will be narrowed to 10 finalists midway through the regular season, and those 10 names will be placed on the official ballot. Ballots will be distributed through a nationwide voting system to media, coaches and fans, who will select one male candidate and one female candidate who best exemplify excellence in the four Cs of community, classroom, character and competition.

The Senior CLASS Award winners will be announced during the 2014 NCAA Men’s and Women’s College Cup championships in December.