Kelsey John is one of three Syracuse University students in 2014 to win the NSF Graduate Research Fellowship. John is a Ph.D. student in cultural foundations of edcation.

Fellows receive a three-year annual stipend of $32,000, along with a $12,000 cost of education allowance for tuition and fees, and have opportunities for international research and professional development, while conducting their research at any U.S. graduate institution. 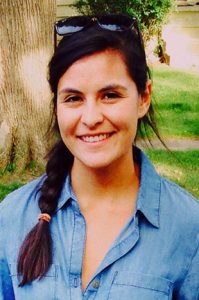 For John, the fellowship is helping her interdisciplinary work in the areas of sociology and social psychology to look at issues of race and education.

John says it was a little unorthodox for an education student to apply for an NSF fellowship. “But one of the major things in my research is bridging gaps and finding common ground between different camps of thought,” John says. “I felt like I could situate it in a way that would do that and have implications more broadly than if I only situated it within an education context.”

“I really wanted to get at the complexity of that by looking at how a mixed race individual, particularly Native American multiracial people, navigate these systems,” John says. “It gets very complicated with mixed race and especially with Native American people who also have another element of tribal enrollment that comes along with identity.”

John encourages other students to consider how their work might fit with an NSF Graduate Research Fellowship.

“Even if it seems your work wouldn’t necessarily fit into what one would conceive of as science, I would argue that it probably does and it can expand on the idea of what we think of as science,” says John, whose faculty advisor is Professor Gretchen Lopez.