The Syracuse University School of Education will host three screenings of the new documentary film “Wretches & Jabberers,” on Saturday, April 16 at 2 pm and 6 pm, and on Thursday, April 28 at 7 pm, at the Hergenhan Auditorium in Newhouse III on the SU Campus.  The screenings are free and open to the public, and the film will be shown in open-captioned format.  Tickets are not required.  Parking will be available in the University Avenue Garage. 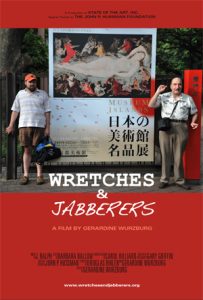 “Wretches & Jabberers” is produced by Syracuse University School of Education Dean Douglas Biklen and its Academy Award-winning director Gerardine Wurzburg. The film is a poignant narrative that follows two men with autism, Tracy Thresher and Larry Bissonnette, who embark on a global quest to change attitudes about disability, intelligence and communication.

A sentimental story about personal struggle that rings with intelligence, humor, hope and courage, “Wretches & Jabberers” is about the life-sustaining power of relationships–the personal connections that people make through communication. The film was funded by the John P. Hussman Foundation, which provides life-changing assistance through medical research, education and direct aid to individuals having urgent needs or significant disabilities.

“Wretches & Jabberers” is the latest documentary by Wurzburg, who won the 1993 Academy Award for Best Documentary Short Subject for her film “Educating Peter,” for which Biklen served as educational consultant. She was again nominated in 2005 for “Autism is a World,” which was also produced with Biklen.

AMC Theatres (AMC), a leading theatrical exhibition and entertainment company, is partnering with the Autism Society and Area 23a, an event-based distribution company, for a unique, national theatrical run of the feature documentary “Wretches & Jabberers” to commemorate National Autism Awareness Month in April.  The film recently premiered at the AMC Empire 25 in Times Square in New York—the busiest AMC theatre in the country and, throughout the month of April, will open across the United States as part of a 40-city tour at AMC theaters in top markets such as New York, Los Angeles, Chicago and Houston. Additionally, AMC will donate a portion of the ticket sales from the 40-city tour to the Autism Society.