The Renée Crown University Honors Program, an all-University program administered by Syracuse University’s College of Arts and Sciences, announces the appointment of Stephen Kuusisto as its new director. Kuusisto is an accomplished poet, scholar and disability rights advocate who comes to SU from the University of Iowa, where he has served as professor of English and ophthalmology. 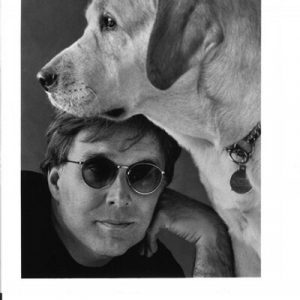 Kuusisto succeeds SU Meredith Professor James T. Spencer, the program’s interim director since 2010, who succeeded Samuel Gorovitz, professor of philosophy in The College of Arts and Sciences and founding director of honors program.

“Stephen Kuusisto is an accomplished scholar and a distinguished professor whose work underscores the interdisciplinary spirit of the Honors Program,” says George M. Langford, dean of The College of Arts and Sciences. “I am confident that he will build on the program’s legacy of excellence, promoting both the liberal arts and undergraduate professional education.”

Langford goes on to praise Kuusisto—whose background includes disability rights—as an inspiration to students everywhere. “His enthusiasm for learning, vision for growth and wide-ranging curiosity are infectious,” he says.

As director of the honors program, Kuusisto will oversee Honors Core Faculty, who help shape curriculum, administration and procedures; staff, who evaluate courses, advise students, manage records and implement policies and procedures; and the department’s budget.

Kuusisto will also have a continuing appointment with tenure as a University Professor. He will be based in the Department of Cultural Foundations of Education, an interdisciplinary graduate program in the School of Education.

“Stephen Kuusisto is an innovative scholar with an unwavering commitment to interdisciplinary education,” says Spencer, who doubles as the college’s associate dean for science, mathematics and research. “Much of his work embodies the institutional vision of Scholarship in Action, and is highly civic in purpose.”

In addition to the University of Iowa, Kuusisto has held faculty positions at The Ohio State University and Hobart and William Smith Colleges. He has taught an array of courses, including those in creative writing, literature, critical writing, journalism, disability studies and cultural studies.

A gifted author and poet, Kuusisto has published half a dozen books, including the recent “Do Not Interrupt: A Playful Take on the Art of Conversation” (Sterling, 2010), and “Planet of the Blind” (The Dial Press, 1998), a best-selling memoir about his struggles with blindness. He also has published more than a hundred essays, articles and poems in Harper’s, the New York Times Magazine, the Washington Post Magazine and other leading publications.

Kuusisto’s success as a poet and advocate has earned him numerous honors and fellowships, including The New York Times’ “Notable Book of the Year” award for “Planet of the Blind.” His work has led to special appearances on “The Oprah Winfrey Show,” “Dateline NBC,” National Public Radio, the BBC and others.

Recently, Kuusisto and his wife co-founded Kaleidoscope Connections, a national company that promotes employee awareness of and customer service for people with disabilities.

“We’re about creating opportunities to reach out to one another and to look for ways to share stories, experiences and knowledge,” writes Kuusisto, who earned a M.F.A. in English from the University of Iowa. “With that, attitudinal barriers are reduced fostering better understanding and increased comfort levels amongst all concerned.”

The Honors Program is named for Renée Schine Crown ’50, H’84, a civic leader and philanthropist who serves as a member of the college’s board of visitors and as a member emerita of the University Board of Trustees. Described as an enhanced educational experience for exceptional undergraduates, the honors program offers intellectual challenge and curricular enrichment through seminars, honors courses, special cultural events and close contact with faculty and other honors students. The program was founded in 1963, but was renamed and re-envisioned in 2004 to reflect the University’s emphasis on enriched intellectual depth and breadth, communicative empowerment, global awareness and civic engagement.