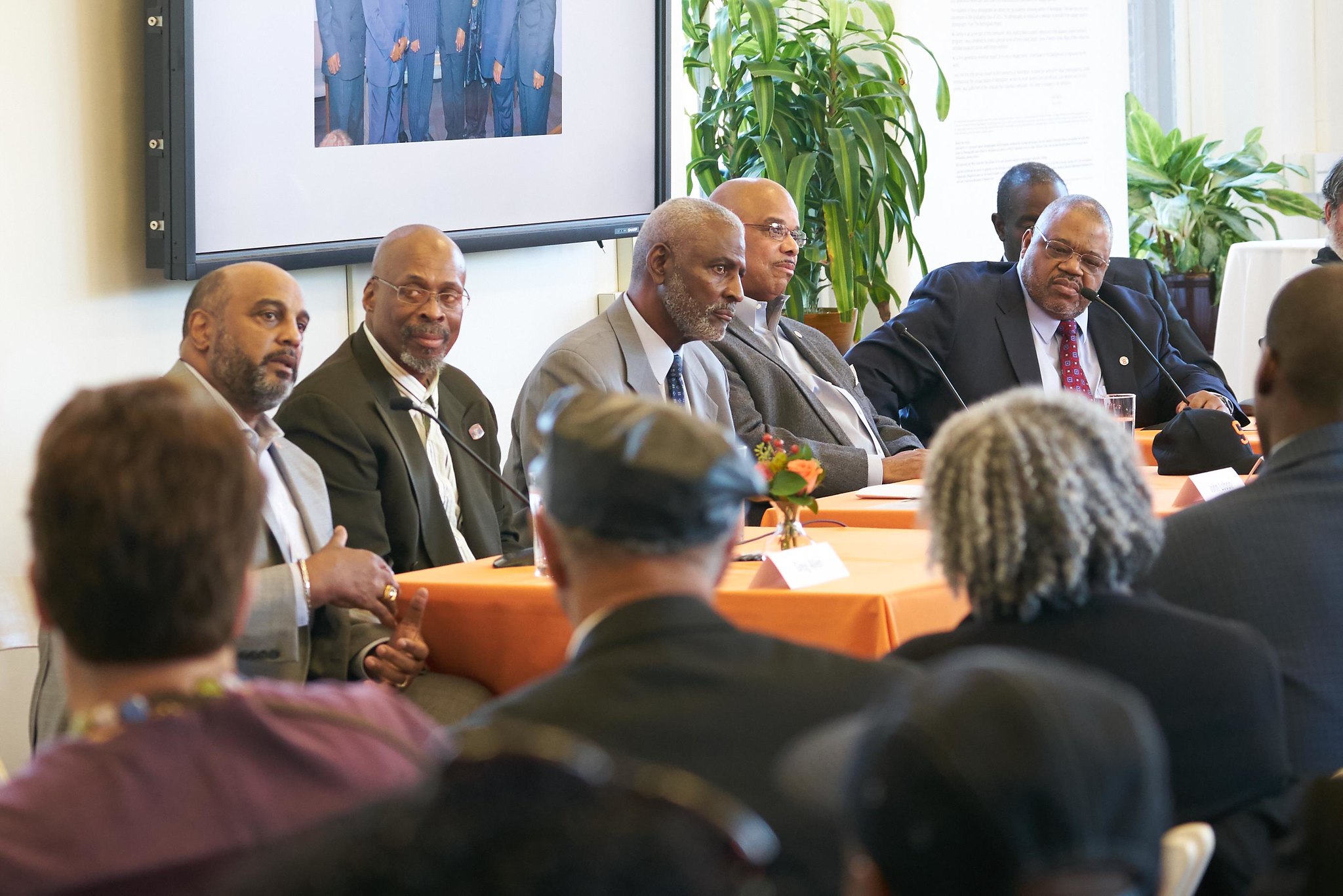 Members of the Syracuse 8 will forever bleed orange. Dubbed the Syracuse 8 by the media in the seventies, the group included nine members of the 1970 Syracuse University football team who petitioned for racial equality on the team. The group came back to Syracuse University for homecoming weekend to tell their story and talk about their book, Leveling the Playing Field (Syracuse University Press). Greg Allen ’73, John Lobon ’73, Clarence “Bucky” McGill ’71, Ron Womack ’71, A. Alif Muhammand, ’71, and Dana Jon “DJ” Harrell ’71, returned for a panel discussion and book signing reception hosted by the School of Education and Office of Program Development. Richard Bulls, John Godbolt, and Dwane Walker, also a part of the Syracuse 8,have since passed. While the intent of the trip was to focus on the book, the men also came back to share their personal and professional journeys, and reflect on the events that took place forty-five years ago.

This trip was a “homecoming of homecomings,” says Greg Allen, because of their current relationship with the University. For these men, being back on the Syracuse University campus was a humbling and thrilling experience but their reception from the University recently, was very different than how they were received forty-five years ago. If you think about it, says Allyn, “to be run out of town on a rail (in 1970) and forty-five years later to be welcomed by everyone on campus is an incredible feeling.” 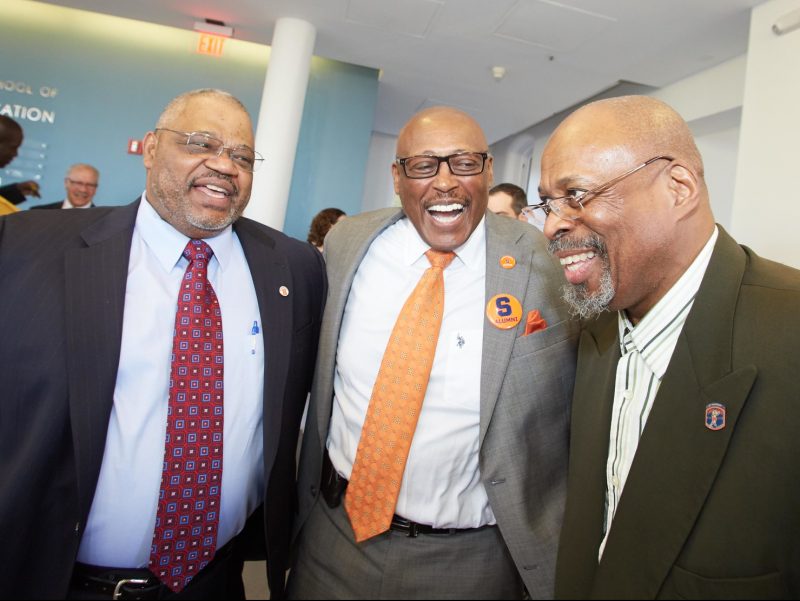 In spring 1970, the group petitioned the football coaching staff with what seemed reasonable demands, including access to the same academic tutoring made available to their white teammates, better medical care for all team members; starting assignments based on merit rather than race; and an effort to integrate the coaching staff, which had been all-white since 1898.

What they were asking for “wasn’t a color thing,” says Alif Muhammad, their demands were about basic human rights for everybody. These concerns went unnoticed and resulted in the nine (Syracuse 8) players boycotting the spring 1970 football practice.  Because of the boycott, then football coach Ben Schwartzwalder, banned seven of the nine players from the team, white players staged a daylong walkout in support of the coaching staff, and an enhanced police presence was required at all home games.

After an extensive investigation from the University and the New York State Human Rights Commission, the Syracuse 8 were exonerated and Syracuse University was found guilty of institutional racism. This decision affected the University, says Muhammad.  It affected hiring practices within the athletic department (an African American football coach was hired) and helped to diversify the University. It also had a ripple effect, changing practices on many college campuses. The group says, however, that even after the decision, they still felt disconnected with the University. They say it was not until 2006, during halftime of the SU-Louisville football game that they finally felt welcomed back into the Syracuse University community. Former Chancellor Nancy Cantor, brought the men onto the field, where they were each given the Chancellor’s Medal for Extraordinary Courage and presented with their Syracuse letterman’s jackets.

The courage and determination to take a stand brought invaluable life-lessons, they say. “What we did forty-five years ago was for future generations,” says Muhammad. “No one else,” he says, “should go through the kind of stuff that we went through.”

In addition to athletic opportunities, each of the men says their primary reason for coming to Syracuse was to receive a top-notch education, which they did. Of the nine members, eight have bachelor’s degrees, and of the eight, four have master’s degrees, one has a juris doctor, and another a Ph.D. They are experts in the fields of finance, real estate, banking, education, and the juvenile justice system. Ron Womack, a career educator, shares his life lessons with his students every day, encouraging their academics first and sports second. The men say they also learned how to encourage diversity and live with the power of politics. They learned that nothing is promised and, says Allen, “there are times when your integrity and self-respect are worth more than anything else.” 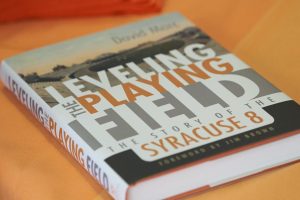 The men wanted to create Leveling the Playing Field and come back to Syracuse to share what they have learned and spread the book’s message of courage and determination. They have also participated in book signing an alumni events in Washington, DC and Harlem. Leveling The Playing Field, chronicled by writer David Marc, tells the story of their struggles through individual accounts.